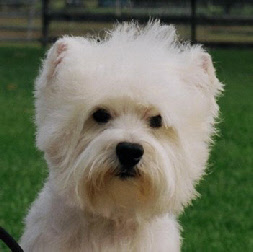 The West Highland White Terrier, also known as the Westie, is a very special dog, and ownership can bring a tremendous amount of pleasure to the dog loving individual or an entire family. This is a breed that seems to fit in with ease, seeming happy and at home in a very wide variety of situations. The Westie is a small, sturdy and truly handy “home size dog”, with a very well rounded hardy personality who is ready for anything. This is definitely a family dog, devoted to all its members, from senior citizens to the youngsters.

The Westie seems to know instinctively how to get along amiably with anyone. That does make it fun to be a Westie breeder, as they are so willing to being loved. The Westie is very distinctive looking and tremendously eye catching and appealing. They are hardy little terriers which are very easy to train. They are extremely friendly (sometimes overwhelmingly) toward strangers, and get along well with children. They do not comprehend someone not adoring them. In their mind everyone loves a Westie as much as a Westie loves them.

They are an easy dog to travel with. They are lively, and extremely self assured toward other dogs, but will not pick fights. They may chase a cat for fun, and need to be corrected once if they attempt this. Because they are so intelligent, one correction is all that is usually needed. Westies just love companionship. Robust, friendly and spirited, the Westie is a perfect dog for any type of living. City dwellers find the small size and good manners make this breed great for an apartment, where his short legs make the space adequate for good health and free run of the apartment. The Westie is also an ideal dog for the suburbs or the country as well as for the more sedate city living. His terrier instincts are right there, with the task of keeping a farm rodent population under control. However, one more frequently associates him with lending his handsome self to enhancing his home and property as a busy little household family companion whose appearance seldom fails to bring an appreciative smile to any face. The Westie is such an outgoing, responsive and all around canine that is extremely difficult to resist.

Being proud Westie breeders, we love the Westie and their vitality and enjoyment of life for which these dogs are noted for. Westies make alert, cheerful, inquisitive companions. The Westie is a happy dog and looks like it is always smiling (which it is).

Westies are very superior pets for children. Small, thus not likely to become overly rough during games with kids, they are also reliable and truly do love kids and are almost endlessly patient with them. Let me remind you though, you should never allow children to become overly rough, maul, hit or hurt a Westie, because that may try the dogs patience and tolerance beyond endurance. Children should regard pets as living creatures, rather than as toys.

Westies are mischievous, their eyes often seem to sparkle with fun as they tease you for a bit of your time. They love your companionship, so taking a walk together, a game of ball, a trip in the car, or a run through the woods can be highly appreciated. Westies love water, and love to swim or be on your boat with you. By the same token, what counts most of all to a Westie, is the pleasure of being with you. So if you are in the mood for reading, watching television, or have desk work to do - your Westie will be equally happy to curl up along side of you snoozing comfortably.

The Westie is a very hardy breed demanding or needing very little in the way of coddling. They have hardy appetites which thrive without an abundance of fuss. Westies in no way lack courage, so if challenged by another dog, they will respond. Under ordinary circumstances they get along well with one another and other pets. The Westie is a big dog in little package.

Never hit or harshly discipline a Westie, and never play aggressive games like wrestling or tug of war. 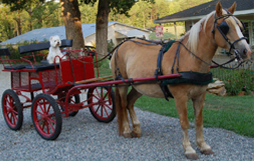 The Westie needs rules to follow and limits to what they are and are not allowed to do. They do very well with a daily (pack) walk. Do not allow this little dog to develop (small dog syndrome) a human induced behavior where the dog feels he is the pack leader to humans. This can cause varying degrees of behavioral problems, including, but not limited to, obsessive barking, guarding, separation anxiety, snapping and even biting. These are NOT Westie traits, but rather behaviors brought on by the way the dog is treated. If you begin to be your Westies pack leader, and are self-assured, calm, kind, and loving, but assertive toward the dog, the Westie will be a very stable minded trustworthy dog. In general, the Westie is a quick learner and intelligent, and thrives on kindness and proper guidance.

The Westie is a solid built little dog, and only comes in white. That is why they are called West Highland WHITE Terriers.

Westies can have some health problems, and a responsible breeder prevents breeding of those problems, although no matter much prevention is taken, sometimes problems may occur. Life expectancy is about 15 or more years.

Choosing Male or Female As Westie Breeders, we understand that when choosing a Westie as your pet and family companion, many people feel that one sex is better than another. Most people think a female is the better choice, when in actuality, both make satisfactory pets.

A neutered male “does not mark” inside or out, if he is neutered at the appropriate age; nor does he exhibit other undesirable “bad boy” characteristics many associate with male dogs. The male is more affectionate and willing to please, where as the females tend to be a bit more independent and bossy.

If this is your first Westie, it probably won’t be your last. Westies do extremely well in pairs or groups of dogs. If thinking about 2 Westies, we recommend 2 neutered males or 1 male and 1 female. 2 females can sometimes try to dominate each other, although sometimes there are exceptions to the rules. If there are a few females together we always recommend to add a male to keep the girls in a stable frame of mind. Westie owners become loyal fanciers and seldom want another breed. Many say the only thing better than owning a Westie, is owning two! (or more). 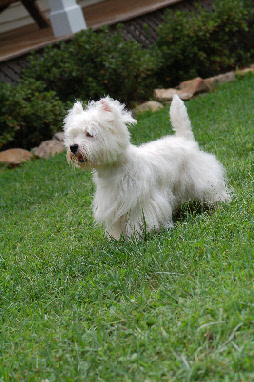